Home » Horoscope » What Positions of Planets Made M.S Dhoni a Success Story 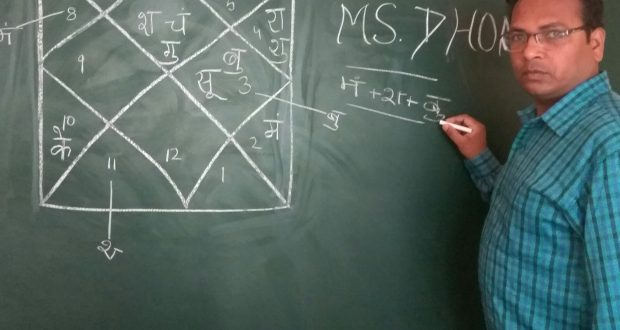 What Positions of Planets Made M.S Dhoni a Success Story

Dhoni’s birth horoscope has the entire sum required to become a brilliant cricketer or a sportsman. The things about Dhoni that are more popular than his horoscope are his cool attitude, his desire to avoid defeat in the struggle, and his diligence and capability to fight against all odds and these are some of his qualities that make him stand out from the crowd.

The factors required to become a successful cricketer, about which I had written in my previous article, can all be found in Dhoni’s horoscope. This means, the direct relation between the Lord of the third house – Mars and the master of the sixth house – Saturn can be seen in the Draeshkon Horoscope of the birth horoscope.

Mars and Saturn are Key Planets

The position of Mars and Saturn is very strongly seated in the Ascendant. This union is extremely effective and has presented Mahendra Singh Dhoni as a famous cricketer. The Lord of the tenth house – Mercury, is seated along with the Sun in the tenth house.

Jupiter is a boon, a blessing that has supported Dhoni from time to time. In April 2005, when Dhoni gave one of the greatest performances of his career, it was the time of emergence of Jupiter, because, in his Horoscope, Jupiter is seated in the Ascendant and is present in very powerful degrees of 7 to 23 where it gets directional strength.

After this he has never looked back, the state of Rahu made him a star, which started in the year 2005 with the intervention of the Jupiter. This happened because no planet can show special effects under its condition and its interference, hence the state of Rahu and on the arrival of Jupiter, Dhoni found a meaningful direction to his life.

Next article is on God of Cricket…
Keep reading and sharing.