Home » Marriage Horoscope » How will be my Married Life 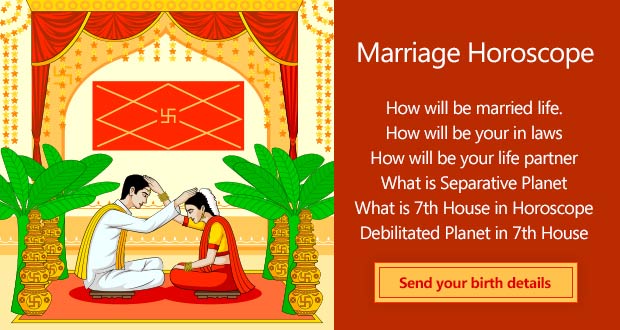 How will be my Married Life

Married life is a base where two lives are at stake. We analyze by Marriage Horoscope how the relations will be between husband and wife. Their bilateral differences not only destroy their own life but also the future of their children becomes gloomy. Regarding this matter let’s know about the planets, which affect our marital life.

Know your married life for free. Here is the form to help you. Just send your date of birth & other information so we can analyze your horoscope. You will get answer by email itself.

Manglik Yog is not that harmful as people believe it is.

Being a Manglik it is harmful if someone marries with non-Manglik. If you are non-Manglik, you should not marry a Manglik person. If Saturn is also in 1,4,7,8,12 the Mars will not affect the married life. This is called partial Manglik. I think there is no harm if you are Non-Manglik and marry a person who is Partial Manglik.

Separative Planets in the seventh house of the horoscope

As per Indian astrology 7th house in horoscope is for spouse. Sun, Mercury & Rahu is known to be the separative planet. If two out of three planets are in 7th house then the possibility of divorce is around the corner. If Sun is in 7th house, in enemy zodiac sign or debilitated, the chances of separation will be always there.  Jupiter in women’s horoscope and Venus in men’s horoscope are the ruling planet for the spouse.

Is when will I get married your question too? Just click here to know your marriage age prediction by date of birth free online from Ashok.

Saptmesh (the lord of seventh house in the horoscope) is the planet which decides your relations with your in-laws. If Saptmesh is strong then your in-laws will be strong as well.  If Saptmesh is debilitated or some planet is debilitated in the seventh house then husband or wife is ought to be wretched minded. In this context please check if some favorable planet’s aspect is on the Seventh house then the result can be less effective.

There are also other factors which spoil the marital life but above mentioned reasons are largely effective.

But if you are not familiar with Marriage Astrology you can request your marriage prediction to us. Dial 89 29 187 187 for a free prediction of marriage.