According to Vedic Astrology, ninth house of the horoscope is the house of Fate, Religion, Destiny & Fortune. Jupiter is the lord of this house. This house tells the native’s religious inclinations, whether the native will be theist or Agnostic? This house tells native’s religious activities, religious habits etc along with native’s irreligious, impious & profane habits. How much religious duties & how much virtuous things or sin he will commit? Every information can be get from the minute study of this house. Ninth house also tells that Luck shall favor the native or not.

Luck plays vital role in the life of a person and it is Ninth house which tells us the role of Luck in our life. If you see in the horoscope chart of a person other house of horoscope & all planets powerful and Ninth house weak then all efforts of the person shall be useless, his hard work will go futile.

Everyone knows the role of hard work but we can’t deny & overlook the fate. We often see the price of our hard work increase manifold when luck favors and on the contrary our hard work proves to be zero when luck do not favor. In our practical life we see thousands of persons enjoying the life only on the strength of fate while we are well aware of their abilities. Luck makes mammoth tasks done in a jiffy.

This is horoscope chart of person whose parents dies in his early age. All the planets in his chart are very weak but Jupiter is exalted in the ninth house. This person’s parents died and from his childhood he starts doing the work of Gardener in a Nursery. Now see the role of destiny, the owner of the Nursery went to abroad and he had no children. Later the owner made him the owner of the Nursery and gives him the ownership legally. The Nursery was situated at National Highway, after sometimes the rate of the land & property increase manifold day by day. This poor fellow became a billionaire; we see the role of destiny here. 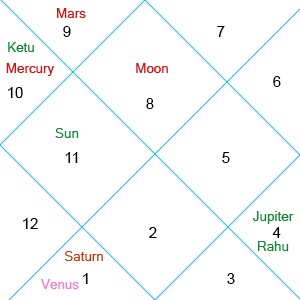