Home » Marriage Horoscope » What is Kumbh Vivah and how it can help Manglik Bride or Groom? 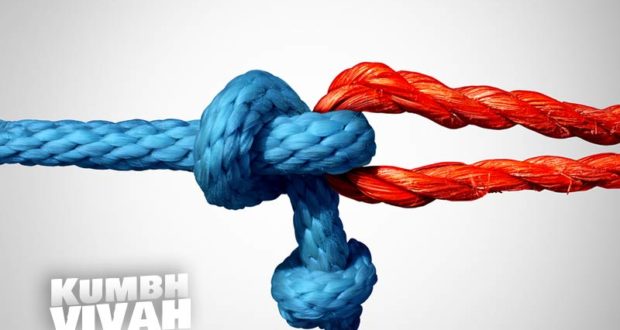 What is Kumbh Vivah and how it can help Manglik Bride or Groom?

The term Kumbh-Vivah is made up of the combination of the two words Kumbh and Vivah. Kumbha means an earthen pot and you know the meaning of marriage. Marriage with a pitcher is called a Kumbha marriage. A girl is married to a pitcher under certain special circumstances. This marriage is done in the same way as a real marriage. The Priest breaks this Pitcher after its marriage with Girl.

Get predictions of your marriage using the form below.

We suggest Kumbh-Vivah for the following reasons:

Marriage with Kumbh on Widow Yoga

When such planetary conditions are being created in the horoscope of the girl, which suggests that the girl’s husband will die after marriage or she will not get happiness from her husband, then Kumbh marriage is advised. It is expected that the pitcher was her husband and has expired after marriage. Now when she gets married to a boy, it will be called her second marriage.

Kumbh marriage when there is the yoga of two marriage

Whenever the Sun and Rahu, Sun and Saturn, Rahu and Saturn, etc. two malefic planets sitting in the seventh house of a girl’s horoscope, then this combination indicates towards the two married in girl’s life. In this situation also, it is advised to the girl to marry with the Kumbh and break it after marriage.

Suppose the possibility of having two marriages is seen in the horoscope. Then if the first marriage is performed with pot and break it and afterwards perform the normal marriage with the boy then the yoga of two marriages of the girl will be completed.

Kumbh marriage if Girl is Manglik

If Mars is seated in the first, fourth, seventh, eighth and twelfth house of the horoscope of someone, then it is called Manglik dosh. The reason for this is that by sitting in these houses of the horoscope, Mars reduces the lifespan of spouse and hinders marriage happiness. However, Kumbh marriage is not done only when Girl is Manglik, but Kumbh marriage is advised according to the position of other planets in the horoscope.

Planet Mars in the first House of the Horoscope

Planet Mars in the fourth house of the Horoscope

Planet Mars in the Seventh House of the Horoscope

As I have mentioned earlier that the seventh house of the horoscope represents the marriage and spouse so the presence of Mars here is not considered good for both. However, Kumbh Marriage should be performed only when if there are Taurus, Gemini, Cancer, Virgo, Libra or Aquarius zodiac sign otherwise not.

Planet Mars in the Eighth House of the Horoscope

If there are Taurus, Cancer, Leo, Virgo, Libra, Sagittarius, Aquarius zodiac sign in the eighth house of the horoscope then only you should think about the marriage with Kumbh otherwise not.

Planet Mars in the Twelfth House of the Horoscope

Besides the Manglik yoga, we suggest the Kumbh marriage if Rahu or Ketu sits along with Mars in the Manglik horoscope. The reason is very clear, Rahu being a separative planet create havoc in the married life when it joins Mars.

In the Manglik Horoscope if Mars is sitting in any other house other than the seventh house but Rahu or Ketu sits in the seventh house of the horoscope then also it is the inauspicious situation. In this kind of situation also, Kumbh Marriage is suggested.

Manglik Yoga 2020-01-19
+Horoscope-India
Previous: Planning to get married in 2020 Beloved? Know Best Time to do Love Marriage
Next: Astrology Benefits of wearing a pearl. Gemstone Astrology