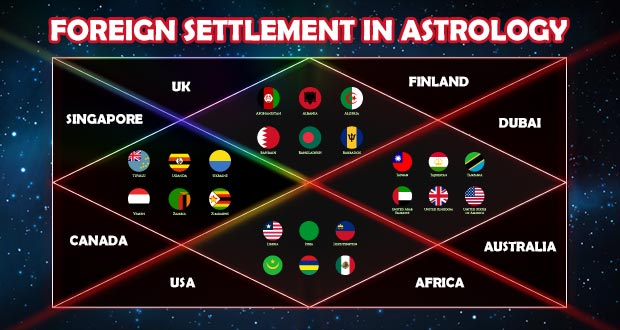 The readers of the astrology are well aware that the second house of the horoscope tells us about the family, immediate family members of the Native. In case, this house inflicted by the separative planets, the Native compel to stay away at some distant place from his family. Therefore it is essential to consider the second house of the horoscope in the context of travel to foreign country.

Difference between 2nd and 4th house for abroad travel

The fifth house of the horoscope represents the education. In the context of travel to Abroad, we consider this house whether the Native will go Abroad on study basis.

The ninth house of the horoscope refers to the Foreign Travels by the Native. We consider the long journey by the Native from the study of this house. This house tells us about the fruitfulness of the journey/ travel/pilgrimages performed by the Native.

In the context of the foreign travel, we consider eighth house because this house is opposite to the second house of the horoscope which refers family. Thus the distance from the family comes into the realm of this house. The eighth house is associated with the property, sudden profit-loss, and import-export also.

10th House for B1 Visa or Onsite Opportunity by astrology

The study of the Tenth house in the context of foreign travel is essential because this house represents the livelihood. We get the information about the livelihood of the Native. This house is responsible for onsite opportunities for those who are working in MNC’s as an important employee.

Abroad Settlement by the 11th house of the horoscope

The eleventh house of the horoscope tells us about the source of the income of the Native, how he will earn the wealth, property etc. This house reveals not only professional but it also reveals the source of income from the foreign to Native. When this house is responsible for your abroad settlement you go abroad to earn money.

The twelfth house of the horoscope refers to the long travel, travel to Abroad and thus separation from his birthplace. The Native gets separated from his relatives if there is planet sit in this house. In case this house is afflicted then there is the possibility of jail to Native. Due to separation tendency of this house, we consider this house in the context of foreign travel.

I am going to introduce you, in brief, some planetary combinations responsible for foreign settlement in the horoscope.

Going Abroad on the Study basis

The Eleventh house of the horoscope is known as Income, 10th house represents livelihood. Thus Native definitely goes to Abroad for a livelihood when lords of the tenth and eleventh house situated in the Sixth, Eighth, Twelfth house.

Get trapped or Entangled in problems in Abroad

The Foreign settlement Yog from the Sixth house

The person goes to such a foreign country where he lives like a hostage, this type of situation arises when the foreign travel Yog comes into existence from the sixth house of the horoscope. Such a situation has been seen in the horoscope of those people whose passports, paper are kept by the company. The comparison of living of these persons can be likened to the tongue between the teeth.

The Foreign Travels Yog from the Third house

The Foreign Travels Yog from the Eighth house:- The Native goes to Abroad with the help of his in-laws and stay there for a long time when two or more than two planets occupy the eighth house of the horoscope.

In this way you will see that there are so many yoga responsible for the Foreign settlement and we can’t  describe all here and if I start writing about all then the book can be written on this topic but I have tried to explain briefly about the maximum. You have the right to agree or disagree with me. If the article looks good then share it, if not good, then make sure to give any remark. In that case, efforts will be made to make this article even better. I thank you for giving your valuable time till then Bye.

2019-06-07
+Horoscope-India
Previous: Blue Sapphire – Benefits – How to Wear – Who can Wear
Next: Co-Incidence or Sanjog of Marriage