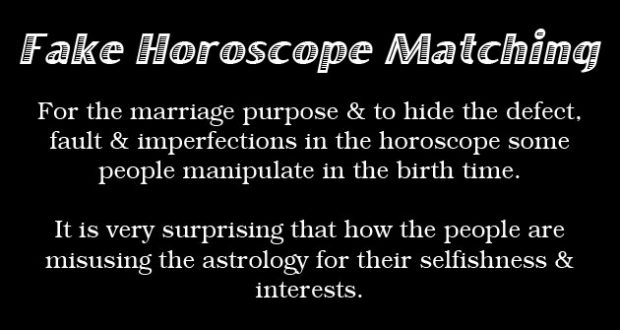 Imagine a marriage proposal has come to a person for his daughter. As the proposal is good and everyone in the house was willing to convert this proposal into marriage. Now the groom side party comes to see the bride and express their consent. The bride’s father want to match his daughter’s horoscope with boy’s horoscope. They ask the groom’s father for the same. A scholar astrologer do the work of horoscope matching for both the bride & groom, he declared it is good match. The marriage is fixed. After marriage everything was not well, later they come to know that the there was something wrong in matching of horoscope.

This is the story of majority of Indian family. The same was happened to the Mishra family of Delhi. In the month of January 2013 this family came to me. I myself saw the horoscope of their son. I questioned what he does (occupation). They said that he is an engineer in a company at Gurgaon. I was surprised as per the situation the placement of Saturn must be in the tenth house of the horoscope but it is in the 11th house. After reading horoscope I declared there is no Manglik Dosha in the horoscope, Venus is also good in the horoscope. I said as 26 points are similar in boy & girl’s horoscope therefore there is no problem in marriage. But I had some doubt and I checked the boy’s birth time. His birth time was 8.45 in the night and after 25 minutes there were some changes in the Ascendant. The placement of Saturn in horoscope will change if the boy’s birth time is 9.10 P.M. or after it. The Saturn will be in the tenth house instead of 11th house. My point is that the planetary position in his birth chart was indicating that he is not engineer but if birth time increase up to 1 hour then there is similarity between his occupation & planetary position in his horoscope.

For the marriage purpose & to hide the defect, fault & imperfections in the horoscope some people manipulate in the birth time. It is very surprising that how the people are misusing the astrology for their selfishness & interests.

After reading the horoscope if all astrologers are telling about any defect then the related person will do something to hide the same defect. It is quite possible, then what should we do? I can say & suggest only one thing i.e. astrologer & concerned person should not jump to any conclusion in hurry.

Nowadays no one has the time, everyone wants the quick decision. Sometimes astrologers ignore & overlook the small but important things. Through computer within minutes they check about the Manglik Dosh & Gun Milaan and come to conclusion. For the sake of Astrology this type of practice should be stopped.

How to mach horoscope – The essential points

I think for the matching of horoscope it requires minimum 30 minutes time. If the astrologers are giving you the result within 5 minutes then it is very serious & matter of worry. Some important things are as follows:-