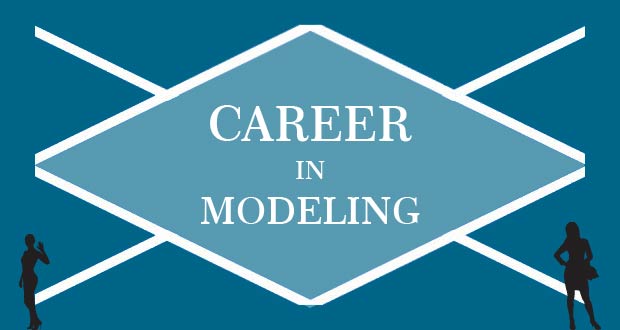 Career in Modeling By Astrology

Modeling means a career full of glam and glitz, in which the model has to project a brand image with good looks and style. If you are looking for the career in modeling by astrology this post may help you. The career astrology is a way you can find the answer, will I become a model or not?

What will make you a famous model? 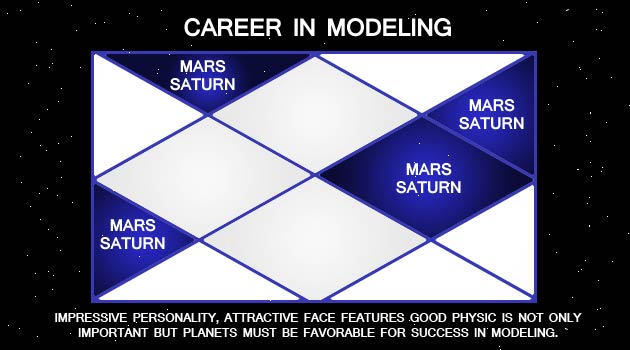 To make a glorious mark in the realms of modeling, you don’t just need dazzling looks and decent built, but you also need extrovert nature, a refined understanding of people, and continuous focus. You must be eager to mingle with others, ready to new ideas, accept criticisms with sheer positivity, and remain open to take the challenges of the world of modeling.

Can you really be a model?

The essential element that can make or mar your chances in the world of modeling is your own destiny, the wheel of fortune. If you are not born with the fortune favoring your chances of ruling the roost, your efforts might prove to be disappointingly worthless.

The sad story of strugglers!

The society has always been smitten by the film stars and models. Every day thousands of aspirants toil hard to get a chance in the ‘larger-than-life’ world of films and modeling. They are so infatuated by the idea of a career in the glamour industry that they make relentless efforts, day and night, for many years altogether. Little do they realize that efforts, if misdirected, can never grant them the dreams that they always aspired for. More often than not, they attribute their failure to insular circumstances, lack of a mentor or father-figure in the industry, or the final need to get settled in life with a job that pays their bills and helps them get married. They do not realize that the destiny of their dreams is held in the hands of their birth planets.

Even the average looking may RULE STARDOM

We have countless legends that struck a permanent mark in the cumulative psyche of the society, and created a niche in the field of modeling and acting without having the typical looks and appearance required to soar high in the glamour industry. Many great models and actors such as Rajnikant, Irrfan Khan, (Late) Amzad Khan mastered the art of their profession to such a level that they continue to inspire the current generation of film and modeling enthusiasts.

Wheel of fortune calls the shots!

Some people reach the pinnacle of success in this industry due to their elegant looks and bewitching personality, while many others taste the nectar of success due to their strong fortunes. Everyone talks about cause and effect and the scientific rationality that lies between, yet those who understand the role of fortune in life are able to travel in that path which provides the least resistance in the road to success.

Know the planets that will make you a famous model

In this post, I will explain about which planets are responsible for fortune, and which planets, if favorable, may elevate you to the dizzying heights of success in the field of modeling and acting. Let’s talk about the desired planetary position to taste phenomenal success in the modeling career;

“The nature and strength of your ascendant are crucially important” The glamour industry soaks an individual in immense fame and glory, and wealth invariably gets attracted to the famed people of the society. Ascendant is considered to be the responsible planet for showering abundant fame over the native. If the ascendant, the sign of ascendant and occupying planet/s are strong, you will undoubtedly be full of charm and your physical looks would be exquisite, to say the least. A distinct aura would surround you. If the ascendant is strong, you are destined to reap the fruits of fame, no matter what.

Promises of Mars and Venus to make you a model

If the ascendant planet is Mars, placed in the signs of Aries or Scorpio (for these signs Mars holds the Lordship), the sure-shot recipe to success in modeling is already in the platter.

If in the natal chart of the native, Venus is located in the signs of Taurus, Gemini, Libra, Capricorn, Aquarius or Pisces, it is advisable to start the career in modeling. You are destined to reap high rewards and create a legacy for yourself in this profession.

Favorable Sun would take you to grand heights

If Sun, the king of all the planets, is present in the ascendant sign, you will dominate everyone around, be it the contemporaries or the veterans. Sun should not be placed in the sign of Libra as in this sign, Sun is considered to be in debilitation (strength or ability to carry on with regular activities of a planet is seriously affected when it is in debilitation).

Mercury, Venus, Jupiter, and Moon are considered to be benefic and auspicious planets. If two or more than two of these planets are placed in either the ascendant or the second house, you will be driven to the field of modeling and will eventually excel in it, without a second thought.

Angles of the horoscope should be occupied

If the angles (kendras) of the horoscope i.e. 1st, 4th, 7th, 10th houses have benefic planets in them, you must try your all-encompassing efforts to do well in the field of modeling. Occupation of auspicious planets in any or all of these houses is considered to be fortune-enhancing for your efforts targeted at making a mark in the glamour industry.

The sacred blessing of Jupiter

Malefic planets may give an edge to your looks

If Saturn, Mars or Rahu are situated in the ascendant sign, and gain an aspect from Jupiter, the physical stature and built of the native is in right proportions. Such a person would neither appear to be emaciated or fragile nor would be considered bulky or obese, thus increasing the chances of getting success in the modeling career.

What is Vargottam Planet? Do you have it?

When the lord of the ascendant is placed in the same sign, both in D-1 (Lagan Chart), and D-9 (Navamsa), it is said to be ‘Vargottam’ planet (planet excels in divisional charts) and its power increases manifolds. It makes the native gorgeous and imparts a subliminal beauty, well appreciated by the masses and classes alike.

Ketu will give color to your personality

If Ketu is present in the ascendant, outwardly appearance and countenance would be distinguishably different from the crowd. Your personality will have its own insignia and inherent magnetism, especially if the ascendant is free from the malefic aspect of any inauspicious planets i.e. Saturn, Sun.

Will Moon make you glamorous?

If Moon is situated in the ascendant of 5-26 degrees, the physical appearance would be stunningly good, your hair would be silky and curly, your face would be shapely and resplendent, in total, your looks would be naïve and enchanting.

Predicting the struggles in the modeling industry

Now let’s focus on those planets and their positions in which even in the presence of benefic and auspicious planets, you might have to struggle in the field of modeling, which means you are not destined to taste outstanding and real success in this field.

Saturn slows the success: If Saturn is placed in 11th house, 7th house or in the ascendant, you will get late success in the field of modeling. But to achieve success even at a later stage, the required, mandatory planetary position must be there in the birth chart.

Mars hates being in 6, 7, 10 houses of models: If Mars is in 6th, 7th or 10th house of the birth chart, the ascendant would be taken as influenced by the Mars. In such cases, native cannot be expected to taste much success in the modeling industry.

Noble and evil don’t mix together: In the ascendant sign, if benefic and malefic both types of planets are placed, the modeling career would be full of obstacles. One must not expect a smooth-sailing or upscale ride to success in such cases.

To accomplish all-around success in the modeling world, apart from the placement of strong planets in good positions, the nature of running major period (Mahadasha) also plays a decisive role.

Let’s take an example. If Venus, Mercury, and Jupiter of your birth chart are placed appropriately to take you to nauseating heights of success, but in the present you are running major period of Rahu, which is for duration of 19 years, then by the time your Rahu major period would finish, you would have advanced much in age and attain success thereafter. In this context, innumerable glowing examples are there, such as those of Ajay Devgan, Amitabh Bachchan, Naseeruddin Shah, Milind Soman, Saif Ali Khan etc.

If you realize that your looks are extraordinarily stunning, and have an unflinching belief that you are talented enough to leave a legacy in the modeling industry, you can direct all your efforts to achieve success in this field without taking note of your planetary states. Karma is the only way by which a person can change one’s destiny. I fully believe that if appropriate yogas are present in your birth chart and planetary positions are conducive to your ambition, you must work hard to reap the promised rewards of your horoscope.

Remedies may be necessary to overcome strong obstructions:

In case you are not able to experience even a mediocre level of success in spite of your best efforts, give us a chance. By studying your birth chart in depth and details, we may find certain solutions that rectify the inefficiencies of the horoscope to give you a glorious chance of success in the modeling world.