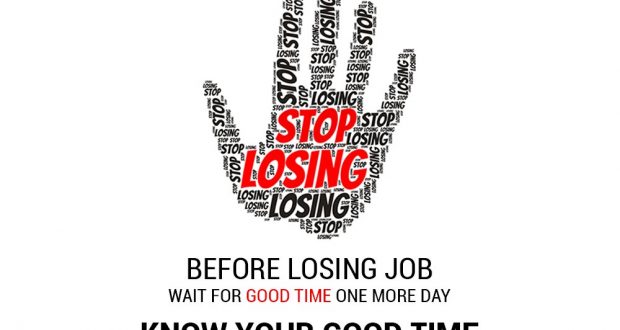 Most people realize that their job is about to go. Nowadays, the situation is such that many people are confused, scared because at any moment they may hear the bad news about the job.

Now let’s discuss when it comes to the job loss, I did a lot of research on this subject and after analyzing found that mainly three reasons are responsible for this – misunderstanding, laziness and waiting which make a good job leave.

Get your career prediction by date of birth by filling the form below.

So, friends, the first thing is that the planet of misunderstanding is the planet Rahu, it creates in our mind a kind of insensitivity, a feeling of insecurity. Rahu’s assistant Ketu completes the remaining things.

In my 12-year job, I have studied it deeply. My friend Anurag, who works with me, said proudly one day that I have no shortage of work, lot of big projects always wait for me. Regardless of the recession, no one even think of removing me and if they remove me, then they will have to bear more loss than me.

Prabhas was another gentleman, he felt that 3 members of his team were getting salary without doing anything, it would not make any difference to remove them.

Now the misunderstanding as I said in the beginning, started from both sides. The first misconception, a person was appointed to work instead of Anurag on a low salary. Prabhas expelled the three members from the company but Prabhas had to handle all the work. Later it took several months for the company to make up for the loss of the three members.

Some stairs go down, the first step is laziness. The second step is leaving the job. The third step is the loss of money. Sleeplessness is the fourth step. If a person go beyond then he will start disappearing to the people.

Now let’s talk about the planetary position related to laziness.

The 12th place of the horoscope represents luxury & enjoyment apart from other things. Venus represents the 12th house and these things. When the period of the lord of the twelfth house of horoscope comes in your life or when the time of Venus comes in your life, then many types of luxuries begin to get you. Slowly, people get caught in the grip of Venus and from here it starts with laziness and the ladder going downwards comes in the life.

It is quite possible that you want to know, the people belong to which zodiac sign are lazy but to avoid the deviation from the current topic, I will discuss it elsewhere.

Another reason for leaving the job is the long wait. There will be many of you who have been waiting for a long time to know when the time will turn and you will get rid of the current position. It has been many years that you are doing the same thing and now you want to change. You always think about the change. Do you know, why you have to wait, I tell you.

The planet, Saturn is the reason behind all this. When this slowest planet affects the ninth house of your horoscope, then whether the position of Saturn is in the third house of the horoscope, or in the seventh house, or in the ninth house or in the twelfth house, then your waiting period never comes to an end, the wait does not leave you. . Almost the whole life spend in some kind of wait. Sometimes you feel that you have been waiting for many births. Due to the laziness of previous lives, the native gets such a planetary position of Saturn in this birth.

That is why some people get irritated and decide to quit their jobs.

Now I am talking about ground reality, you would have to be humble and will leave your attitude and anger at home while you are in office. Treat everyone in the office as lovingly as possible, as if you are going to lose your job today not tomorrow.

The first Remedy, take an iron rod and heat it on the fire, when it becomes completely red then extinguish it in water. Doing this thrice a day will give you so much patience that you will not find anything difficult.

The second Remedy, as you go to work for a livelihood, in the same way, small creatures like ants come out of their house in search of food and keep storing it continuously. Do something that the ants get their food near their hole continuously for some time. By doing this, your need, importance will definitely increase in your office than ever before.