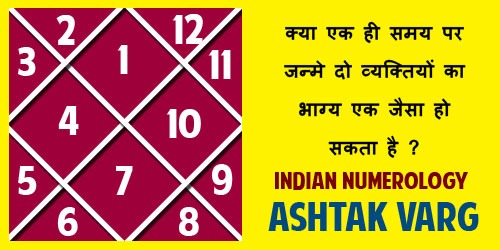 Method of Calculation for prediction in Ashtakvarga

(For the ease of my readers who are new in the astrology I would like to make it clear that counting from 1 to 12 in the chart is the symbol of zodiac sign i.e. Aries, Taurus etc. Ascendant always remains first house; in the present chart Gemini sign is in ascendant.) Read basics of Astrology or Horoscope.

In this way, each & every house and planet of the horoscope gets points from each planet. Finally some house & planet may get more points, some may less. There may be maximum eight points and minimum zero.

Point more than four represent the power while four or below display weakness. The house & planets of horoscope becomes powerful which gets more points & other house remains weak which gets less points.

As per the Ashtakvarga, the planet will become very powerful if it gets six points. It will make the person rich & prosperous. The planet which is having 7 points will make the person popular and competent to do anything. It shows a big Rajyog. In the horoscope of a person, if any planet gets 8 points then the person shall definitely be a big celebrity. The planet will be very helpful for him to achieve a big position. If you study the horoscope of ministers, big politicians, industrialists, film actors and celebrities, you will see one common thing that they all have one or more planet with 7 or 8 points in their chart.

Why Ashtakvarga is Important?

You would have observed on many occasions that two children are born at the same time; but later one became rich & other poor. One remains very simple & other become celebrity. The reason behind this is difference in the Ashtak varg. Ashtak varg make the one person’s horoscope chart very different from the other one. The Ashtak varg of the two person shall always be different it does not matter whether they are born on same time or not.

Therefore I would like to suggest my readers that whenever they visit any astrologer then they must ask him to check the horoscope chart Ashtakvarga point of view also. If he is having the knowledge of Ashtak varg then you can understand that he is big scholar in the field of Astrology and his prediction shall be accurate.